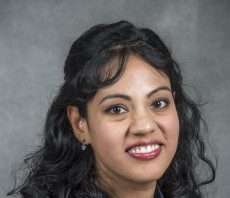 Mariam Kiran, a research scientist in the Scientific Networking Division (ESnet) at Lawrence Berkeley National Laboratory (Berkeley Lab), has been named a Networking-Networking Women (N2Women) Rising Star in Networking and Communications for 2021.

N2Women is a discipline-specific community of researchers in the fields of networking and communications designed to encourage diversity and foster connections among under-represented women in this computing sub-field. N2Woman is supported by IEEE’s Communications Society as well as the National Science Foundation and industry partners such as Google and Facebook.

Kiran was one of only 10 women from around the world honored for this year’s award, which was announced June 23 on International Women in Engineering Day. Kiran was recognized for her growing contributions to applying advanced software and machine learning techniques to enhance high-speed networks and distributed computing challenges.